My first trip to the The Skinny Beast - a steep south facing chute in the tight and ragged contour lines on the lower east flank of Humphreys Peak.
12:30pm on feb 10th after the Agassiz Peak station had been above freezing for 40+ hours.... We camped out so we did not know that, but we knew it was warm. In the entrance to TSB, it was wet on top but still firm enough that no red lights were going off. Snowpack was moist small grain corn snow for at least 1.5 feet deep. Boot penetration was just over the ankles on average.
The Skinny Beast 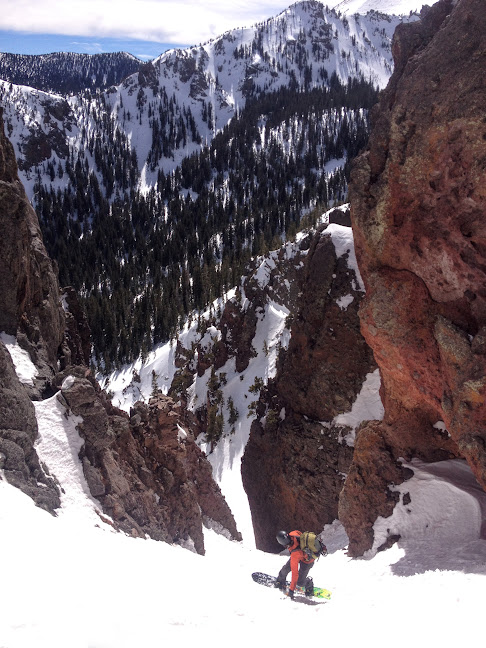 After that we went on to the north slopes of Cleaver Ridge and played in some wind affected powder. The Gorgeous Couloir was a little more fun, and a little less exciting than the TSB. On the descent with Sadie dog I watched her almost get rolled by my sluff. I pulled over and jump on the radio, "guys could you call Sadie dog on down before she gets taken out by my sluff?"
The Gorgeous

Fast forward to Valentine's day, Feb 14th.
Found some 1 to 6", soft and firm wind skins/slabs on S, SW, and W slopes near treeline. ECTP5 sudden collapse on westerly slopes in the starting zones of Temptations. Some collapsing and decent cracking. There were some feathery facets between that windslab and the soft snow below. Hope this heals up before the next dump. And was that an avalanche I saw in Middle Temptation?

We skied the trees where the snow was soft and fast.

We traversed, and found worse wind affected snow in Alison Clay. It's been awhile since I made it into Alison Clay, so that was cool, and there was still soft snow in the trees.
Troy Marino is a splitboarder and on the KPAC board of directors.
KPAC Snow Summary.
Future Guidebook?!
Top
Post Reply
1 post • Page 1 of 1

Users browsing this forum: No registered users and 3 guests